Terzigno is a small town located at Vesuvius slopes, next to Pompeii. The agricultural and food production tradition of this area has its roots in ancient times, when it was scattered with rustic villas made for food production, mainly oil and wine. In 1981 the works of extraction of volcanic material at the Ranieri quarry lead to the discovery of 3 ancient Roman country villas. The structures were buried by debris from the eruption of 79 A.D. (the same that destroyed Pompeii) and were found about 20 meters below the country floor. From these three villas (so-called Villa1, Villa 2 and Villa 6) come numerous and precious finds.

Finally these precious finds, have returned to Terzigno after numerous trips and found accommodation at the brand new Archaeological Territorial Museum – MATT.

The museum was built in the former municipal slaughterhouse, built in the 1940s and subsequently abandoned. But thanks to the collaboration of local authorities with the National Park of Vesuvius, the building has been restored.

The exhibition, set up on the first floor of the building, introduces the discovery of the Roman villas of the Ranieri quarry: on display you will find pottery, agricultural tools up to the beautiful frescoes from Villa 6. 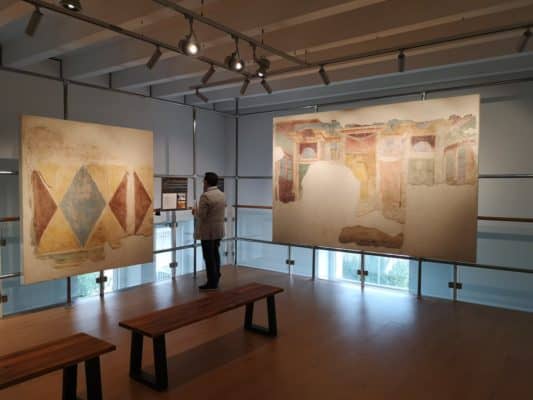 It was, in fact, of the largest and the only one including a living area, in which were also found the remains of five people, including a woman adorned with precious jewels and a purse containing 21 coins. Among the finds from the Roman villas of Terzigno stand out for their importance the famous gold jewels, which have become worldwide symbol of the value and refinement of the Roman goldsmith’s art.

The MATT is about a minute walk from the Circumvesuviana “Terzigno” stop on the Naples – Sarno railway line.

*Due to Covid emergency the opening hours could change*