The history of the Italian railways started right here, in the workshops of Pietrarasa, few km from Naples. On October the 3rd, 1839 in the Kingdom of the Two Sicilies was inaugurated the first Italian railway in Italy. The track, 7411 meters long to cover in 11 minutes, joined Naples, the capital of the Kingdom, with Portici (seat of the Royal Palace during summer periods) and was conducted by two convoys designed by the engineer Armand Bayard de la Vingtrie, on prototype of the English George Stephenson. 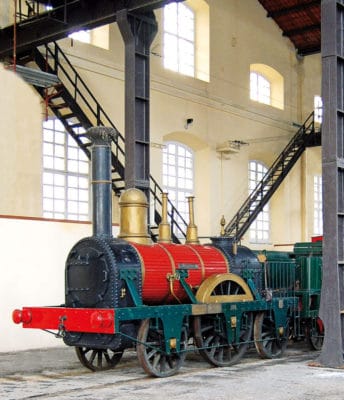 Few years later, in 1842, the complex of Pietrarsa was built, on the place where the napoleonic army was stationed to defend the coast of Naples.  The goal of King Ferdinand II was ambitious: Pietrarsa would have risen to free his kingdom from the technological supremacy of England and France. The following year a real rescript assigned the workshop, initially dedicated to the production of mechanical and pyrotechnic material for the needs of the navy and war, to the construction and repair of locomotives and railway wagons.

The architectural restoration of the entire complex of the National Railway Museum of Pietrarsa was inaugurated in the presence of the President of the Republic, Sergio Mattarella, in the 2017. With a total economic investment of about 15 million euros, the vast project involved both the impressive nineteenth-century architecture of the pavilions, and the large open spaces overlooking the sea of the Gulf of Naples.

The so-called “Salone delle vaporiere”, the museum space of approx. 5000 sqm is dedicated to the exhibition of the most important steam locomotives of the FS. The pavilion was originally intended for assembly/disassembly and repair of steam locomotives. The visit pit, present in the center of the room, is a testimony of these activities once carried out by dozens of workers. At the entrance is placed one of the most famous pieces, the reproduction (1939) of the locomotive Bayard, twin of the Vesuvius that the 3 October of 1839 towed the inaugural convoy of the Naples-Portici. On both sides of the hall, lined on two opposing fronts, the steam locomotives that have made the history of steam traction in Italy. Among these it is possible to admire the locomotive 290, one of the oldest, whose prototype dates back to 1889; the 477, mastodonic locomotive manufactured in Prague, passed into service to the FS after the First World War; 740.115, which transported the body of the unknown Soldier from Aquileia to Rome in 1921; 680.037 which, in 1907, established a record, reaching with a train of 210 tons, the speed of 118 km/h and, finally, the 625, nicknamed by the railway workers “the lady”for its graceful forms.

More than an “unusual” museum for the topics covered, Pietrarsa is also an enchanting space from whose terrace enjoys a spectacular view of the coast of Naples. 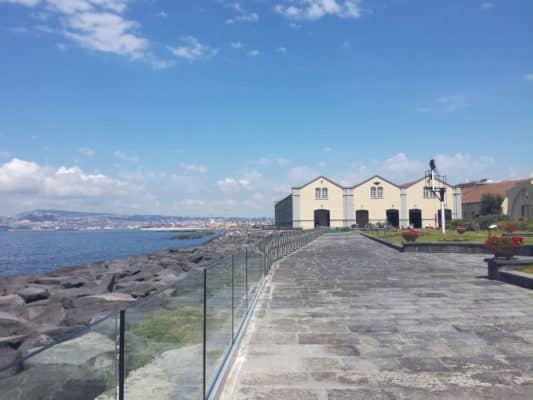 Trenitalia also gives the opportunity to go to the Museum experiencing the thrill of a trip onboard vintage carriages “Centoporte” and “Corbellini”. With the “Pietrarsa Express”, visitors will be able to reach the museum starting from the central station of Naples choosing between the morning and afternoon runs. The itinerary will continue with the free visit of the Museum of Pietrarsa, included in the train ticket.

And there is even more! Even with Archeotreno visitors of Pietrarsa can experience a journey through time and space: starting from Naples Central, aboard carriages of the ’30s “Centoporte” and ’50s “Corbellini” will cross the stations of Pietrarsa-San Giorgio Cremano, Portici-Ercolano, Pompeii, Salerno, Pontecagnano, to the archaeological site in Paestum.

MON -TUE-WEN: for groups only

Tickets can be purchased on all Trenitalia sales channels and on the website www.trenitalia.com.

“Pietrarsa Express” including the round trip, includes free admission and free visit of the Museum the same day of travel in the historic train.