When you think of Vesuvius you think of a volcano; rarely people think of the rich vegetation at its feet. For its richness and peculiarity, in 1995 was established the National Park of Vesuvius: 8,482 hectares have become a protected reserve for the extraordinary set of outstanding naturalist, geological, volcanologists and archaeological aspects.

Vesuvius is a typical example of an enclosed volcano consisting of an external cone, Mount Somma, probably formed during the eruption of 79 AD, the same tragic event that destroyed the cities of Pompeii and Herculaneum. For this reason we speak of the Somma-Vesuvio complex. The two “cones” are divided by the Valle del Gigante.

The old crater rim of Mount Somma is characterized by a serie of peaks called “cognoli”. Still the height of the Somma and its profile have been preserved equal over the centuries. But how many times have we seen prints or old paintings depicting the Vesuvius with different profile? Well the height and profile of Vesuvius have undergone considerable variations, due to successive eruptions, with elevations and lowering. 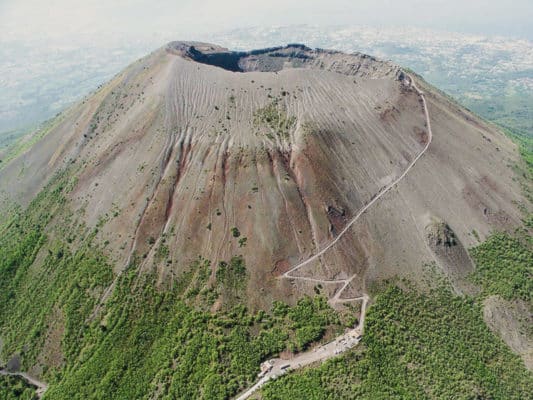 Vesuvius is rich in flora and fauna. It is estimated that it has been colonized by more than 1000 plant species, considering those extinct and those alive. The vegetation is characterized by a high number of species typical of the Mediterranean area, both for the proximity to the sea and for the moderate altitudes. Recent studies have established that today the territory of the Reserve has 744 entities, of which only 2% are represented by endemic species, probably because of the numerous recolonizations that followed the cyclical eruptions of the volcano.

A curiosity: the flora of Vesuvius also includes 19 proven species of wild orchids, which for their rarity and vulnerability are protected by the Washington Convention.

This rich heritage is framed by the amazing panorama of the Gulf of Naples. In order to fully enjoy it, in recent years the Park Authority has realized “The Paths of the National Park of Vesuvius” consisting of 11 paths of different types, for a total length of 54 km of walkway: six circular paths (n. 1,2,3,4,5 and 8), an educational trail (n.9), a panoramic trail (n.6) and an agricultural trail (n.7). 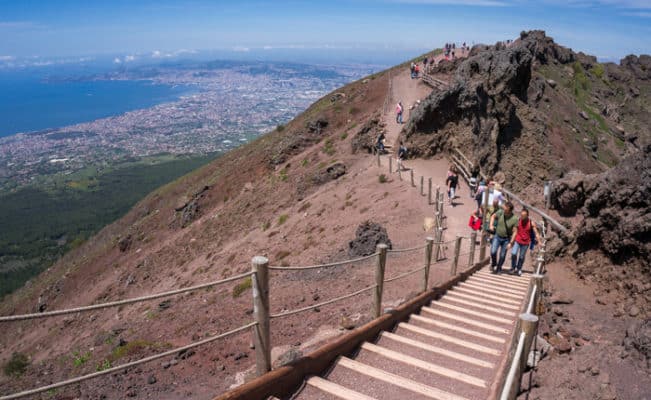 The most path route of these, the n. 5 called “The Great Cone” leads to the fabulous view of the volcanic crater located at 1281 m; the departure/ arrival is accessible from the square at an altitude of 1000 m a.s.l. in the municipality of Ercolano at the end of the Provincial Road Ercolano-Vesuvius. The square has a parking area with attached Infopoint of the National Park of Vesuvius where you can find useful information about the protected area and paths.

So? backpack, proper clothing and up to the crater to enjoy a breathtaking show!

The ticket office is located about 200 meters before the square.

Please note, The trail network is in overall redevelopment and maintenance and some paths may not be equipped with signs. Contact the Park Authority for more information.

By train or bus

From the Central Station take the Circumvesuviana towards Sorrento or Poggiomarino Via Pompei, and reach the station of Ercolano Scavi. Even those coming from Sorrento or Pompeii can reach Herculaneum Excavations on the train line Sorrento – Naples and Pompeii – Naples.In the outer square of the station of Herculaneum Excavations operates a private bus service (www.vesuvioexpress.it) and taxis that lead to 1000 meters square.

Admission:
The entrance to the crater area is only allowed with authorized guides.
The cost of the ticket is:
whole from 10€
reduced price 8€
free ticket for specific categories

Schedule to visit the Crater